Essential landscaping work, at the boundary between Clanfield Community Centre and the Play Area, was completed this week by local volunteers.

The task, commissioned by Clanfield Parish Council, was designed to clear a mass of undergrowth which was encroaching towards the fenced play area, popular with young families. The volunteers, all local residents qualified in countryside management, cut their way through bramble, thorn and other scrub. They discovered metal fences, half buried in the ground; 20m of rusty barbed wire and 5 lost footballs amongst other unexpected items. They also dismantled a ‘den’ constructed by local teenagers which had been a cause of some concern and disposed of a mound of discarded litter. Local residents have been complaining, for some time, about inappropriate behaviour by groups of young people around the Community Centre and the Play Area.

After seeing the result of the work, Parish Council Chairman, John Bannell, said:

“I would like to say a really big thank you to the volunteer team who have done an outstanding job. It has made a huge difference and I have had some very favourable comments from parents of young children who visit the play area. It is much lighter and much safer for people to enjoy.

“I would also like to thank the local residents who have contacted the Police this month about anti-social behaviour within and near the grounds of the Community Centre. We have been in regular touch with them ourselves about these gatherings and the vandalism that has occurred during the lockdown and the support of residents in reporting their concern is very welcome.”

The landscaping work had to be completed before spring to avoid disturbing nesting birds. The trees on the boundary line were left untouched and the beech hedge, at the edge of the centre carpark, will now benefit from the increased light. A fallen tree (elder), completely lost beneath a mass of bramble, was uncovered by the volunteers and found to be alive: it is expected that new branches will grow this spring.

This work will benefit all those who use the Play Area as well as the Community Centre. 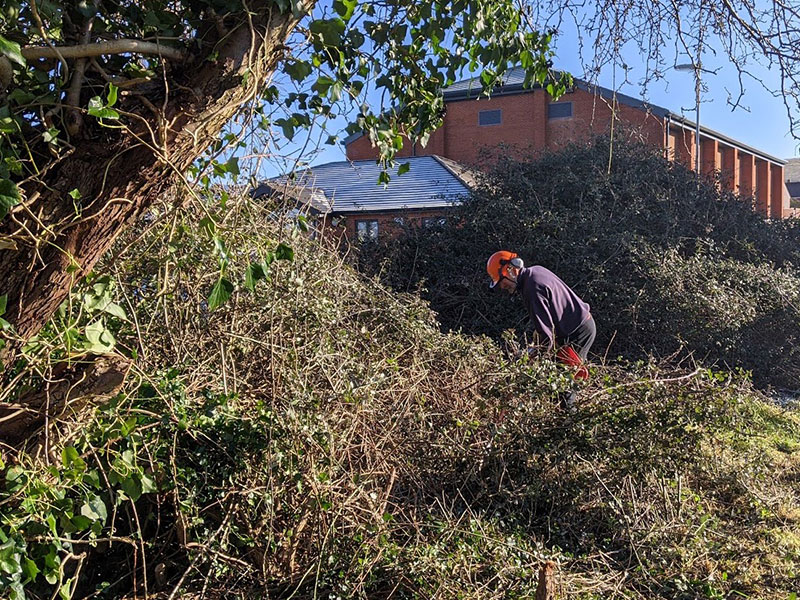