The Down Farm Barn Project

The Clanfield Parish Council Project to restore the historic site

The Task Group of the Council reported to the Council at the December meeting held on 7th December. The minutes of that meeting can be found here.

Down Farm Barn is the prominent Sussex flint L-shaped Victorian building at the junction of Green Lane with Chalton Lane, Clanfield. Clanfield Parish Council took ownership of the site on behalf of the village on 15 February 2019.

When built, the barn was an isolated, welcome landmark, with its pond to the west. It was visible from the Portsmouth to London Road and people travelling down Chalton Lane would have passed it, reassured they were nearing the tiny village of Clanfield.

From 1919 until about fifty years ago, the barn was part of a working farm, begun by William Heath as a market garden. It was converted to a full dairy farm in the early 1930s, when a second cow pen was built. A dairy extension was added some time later and mains water was fed in. The two buildings had tiled roofs.

Other outbuildings were added to house a horse rake, hay sweeper and spinners, horse carts and other equipment as farming became more mechanised. Pigsties and turkey houses were also built to the rear of the property. Regrettably, the family had to sell the farm in the mid-1970s. It was then used as livery stables, with the horses often to be seen grazing in the fields. In recent years the land was sold for development. Down Farm Barn was to have been demolished to make room for three bungalows but a village campaign to save the building gained the support of Clanfield Parish Council.

Not many years ago, Clanfield was a tiny farming community of around 200 residents, many earning a living from the land. Down Farm Barn is an integral part of our village history, so much of which was destroyed during the 1960s and 70s as thatched cottages were demolished to make way for unappealing commercial buildings. It is now our responsibility to preserve and protect what remains of the heritage of our village.

The flint walls of the barn are sound but the roof needs replacing.

Proposed uses for the building include a parish office, a museum/community area and space for rent to generate maintenance income.

Various species of bat have evidently used areas of the building and a wide range of plants and insects have sought refuge on the land. We plan to provide a site which is bat and wildlife friendly. Accessible gardens, in the south-facing courtyard, will enhance the site and promote bio-diversity.

The parish council has formed a working group of councillors, villagers, EHDC and Community First to deliver a project plan; The Goddard Partnership, a local historic buildings and architectural design company, has been appointed to assist. 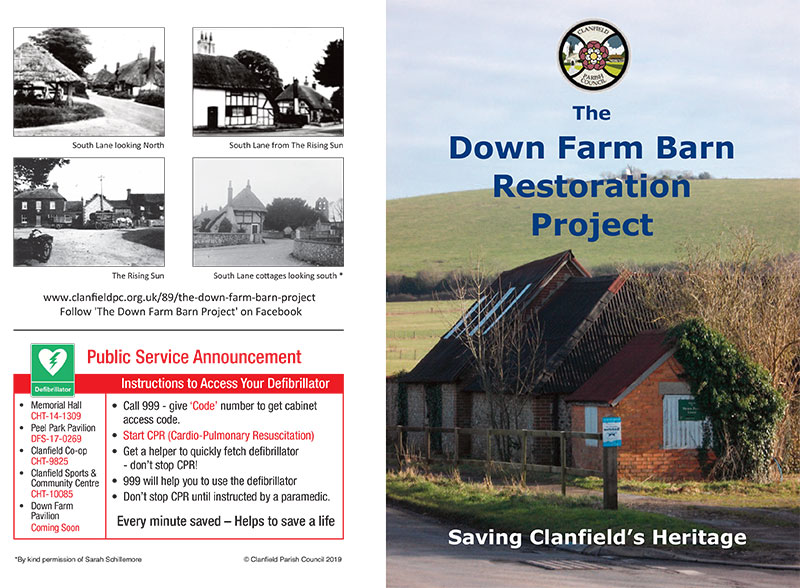 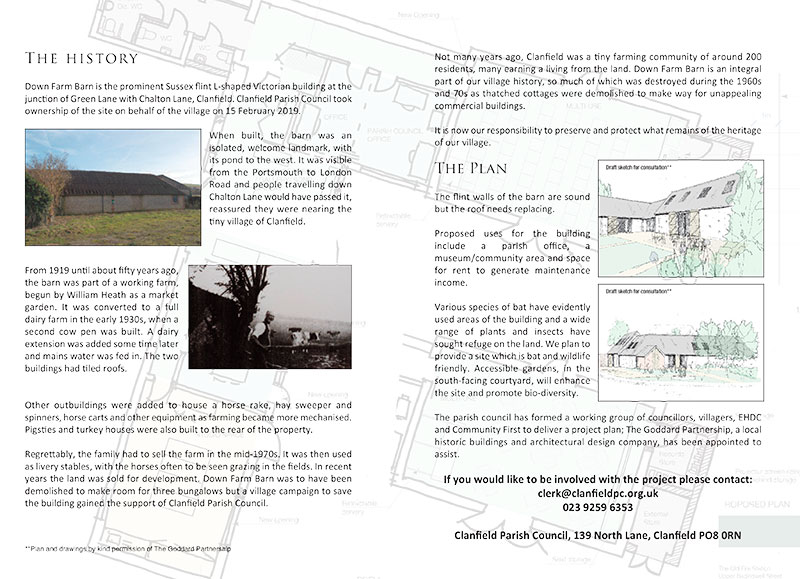